Our Customer Service is open weekdays from 9:00 am to 8:30 pm EST time. Call us if you need help. 718-471-5464
We ship to all US Military Theatres of Operations, all Bases, all APOs and all FPOs. We will match or beat any internet price!

The Sword and Displays are purchased separately.

Click here for a special video message from General Patton 2007 his death is highly exaggerated. 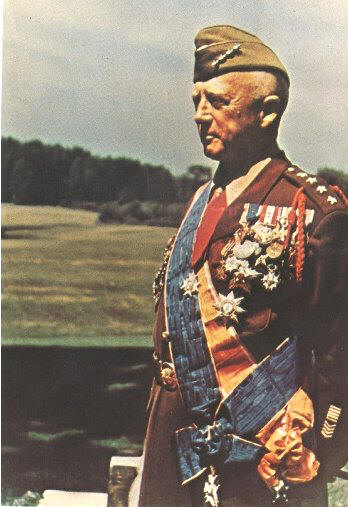 After the fall of France, Marshall began mobilizing the countrys forces. Marshall decided on testing the quality of his generals by organizing the war games. He made Patton a temporary brigadier general and put him in charge of the 2nd Armored Division. Patton trained the division in the deserts of Arizona. In WWII, older generals were looked down upon. Many felt that they were the reason for the stalemate of WWI. So, Patton, at 57, was at a disadvantage. Because of his good performance in the war games, however, Patton was allowed to command.

Patton participated in the American landings in Morroco and Tunis. These were mostly for practice against the Germans. Patton got his first taste of Rommel  and also of Eisenhower's command. Patton already felt that Eisenhower was giving up American sovereignty for amity with the allies. This was the time of Montgomerys great (and last!) victory at El Alamein. After N. Africa, Patton moved on to Sicily. This was where Patton and his army became world-renowned. Patton was given a back role  to protect Montgomerys Eighth Army while Montgomery went on to take the island. But after 2 weeks Montgomery was still only miles from where he had landed. Patton, anxious to be allowed to prove himself, asked General Alexander (British commander of the Allied forces) for permission to attack. Alexander granted Pattons request. Pattons Seventh Army took Palermo and Messina before Montgomery. In fact, despite the 2 week handicap imposed on them at the beginning of the operation, the Seventh Army took 2/3rds of Sicily. This was the beginning of the great American conquests achieved by Patton. However, it was also in Sicily that Patton slapped two cowards who were absent without leave. Eisenhower decided to punish Patton with 9 months of inactivity. It was really the allies that were punished, though, by missing Pattons fine leadership and stunning triumphs. Patton was brought to England to train his new army, the Third. The Third Army was a green army with no previous experience in combat. Eisenhower, Bradley and Montgomery were planning the allied invasion of France. This operation, code-named Overlord, would culminate with the landing in Normandy on June 6 - D Day. Pattons Third Army would not be invading on D Day, and Patton was not allowed to help plan the operation. While in England, Patton attended a social function where he was asked to speak. Patton gave a short speech, and he concluded that It is the manifest destiny of England and America to rule the world. The newspapers blew up. He had failed to mention the Russians! It is hard to imagine, but Eisenhower was seriously thinking of relieving Patton  his best commander  over that. Though he didnt, he gave Patton a warning. One more mistake, and he would be relieved. A month after the Overlord invasion the stalemate at the beaches was virtually unbroken. Then Bradley launched Operation Cobra, a tamed version of one of Pattons plans. This created a hole in the Germans' encrusted fortifications and allowed the Third Army, which had just become operational, to break out through it. Third Army came into the scene suddenly and spectacularly as it broke out of Normandy and raced across France. In Brittany, Pattons VIII corps drove all opposition before them. They swiftly captured the important ports of St. Brieuc, Quimper, Morlaix, and Nantes. The Germans didnt know who was in command of the Third Army, but they did know that in seven days the Third Army had stolen 10,000 square miles from their victorious Reich; a faster advance than any army in history. They must have suspected that it was Patton, because the Germans always held Patton in higher respect than the Americans. After all, the Third Armys stunning advance was far faster than the German blitzkrieg. The Germans now tried to stop the allies advance. Against his generals advice, Hitler ordered 11 of his best divisions to attack the allies. Patton then went in one huge sweep behind all of the German armies, encircling them between two cities, known as Falaise and Argentan. Pattons Third Army was at Falaise, and Montgomerys 21st Army Group was north of Argentan. In one of the most stupid decisions of the war, Patton was ordered to halt at Falaise and wait for Montgomery to close the gap between the two cities. It took Montgomery 2 weeks to close the gap, during which most of the German divisions escaped. Had Patton been allowed to close the gap, the war would have ended in August 1944. There would have never been an East Germany and a Communist dominated Eastern Europe. Thousands of Jewish lives would also have been saved.